AAA School Safety Patrol® allows students to walk safely to and from school. 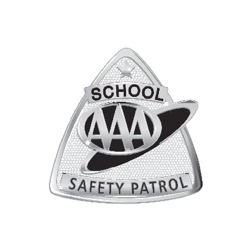 Millions of young people across the United States and 30 other nations worldwide volunteer their time to help ensure the safety of fellow classmates traveling to and from school, and to serve as role models for younger students. Today, the AAA School Safety Patrol® has more than 679,000 Patrollers in 35,000 U.S. schools. Education and safety groups around the world have praised the program for reducing injuries and fatalities among schoolchildren ages five to 14.

The club’s Traffic Safety department provides schools with no-cost safety patrol supplies and training, and administers special safety patrol programs throughout the school year. Enrollment forms for the AAA School Safety Patrol® program are generally due in October, however, we will gladly accept them at any time during the school year along with the number of students who have been added to or dropped from patrol.

For more information on any of these programs, contact us at (888) 527-0180 or email safetypatrol@aaaohio.com.

Please note: additional information on programs or events is sent only to schools that have completed the enrollment form.

Applications are sent to safety patrol advisors who have completed the AAA School Safety Patrol® enrollment form for the school year by the fall enrollment deadline.

Information and application forms are sent to all public, private and parochial schools in Ohio Auto Club territory. Check with your high school guidance office to obtain the application form. Students must complete the application, including their academic record, safety patrol, experience, in-school and out-of-school activities and references, and a minimum 500-word essay.

The application must be signed by the guidance counselor or other school official and the applicant. Finalists will be chosen for a phone interview. Recipients are selected based on their academic performance, school/community service, the essay, and the interview. Finalists who are interviewed but do not receive the $1,000 scholarship will be awarded a $250 scholarship.

Scroll down to see our 2022 winners of the scholarship.

The AAA School Safety Patrol® Hall of Fame recognizes patrol members who exemplify the spirit and purpose of the safety patrol program. Advisors are invited to nominate students to be considered for induction in the Hall of Fame. The nominated patrol members will be asked to answer four short answer essay questions.

Application for the 2022-2023 School Safety Patrol Hall of Fame

The guiding force behind the AAA School Safety Patrol® program is the adult patrol advisor. Their commitment to youth, their ability to inspire and encourage children – and their patience – has long contributed to the continued success of the patrol program. Principals, teachers, parents and students are encouraged to nominate an advisor they feel deserves to be named the AAA School Safety Patrol® Advisor of the Year.

Applications are sent to the principal at schools that have completed the AAA School Safety Patrol® enrollment form for the current school year by the enrollment deadline.

Established in 1949, this is the highest award given to students involved in the program. Recipients are selected patrol members who, while on duty, have saved the life of a person or persons in imminent danger. The Lifesaving Award has been presented to over 400 patrollers.

If you know of a AAA School Safety Patrol® student whom you feel qualifies for this prestigious award, please contact the AAA Ohio Auto Club Traffic Safety Department: